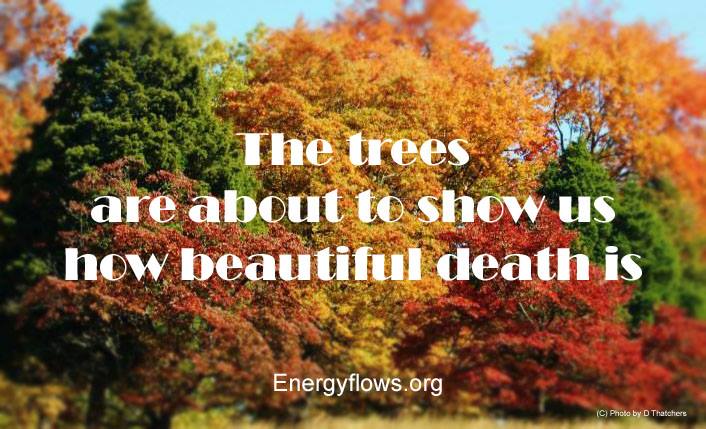 Halloween or more correctly all Hallow’s Eve, is a special night preceding All Hallows day and has been considered for centuries as one of the most magical nights of the year.  But sadly a lot of the real meaning has been lost.

Halloween is a yearly celebration, observed in a number of countries on 31 October. It should really initiate a 3 day observance of ‘Allhallowtide’ which is all about remembering the dead and conducting ceremonies to honor our ancestors  – but this all seems to have been lost in a one night candy feast whilst dressed in ghoul outfit.

I have nothing against dressing up and having some fun, as death is nothing to be afraid of and having a giggle with it – is perfect. But it should not all be about the horror, the eerie or the scaring of people. There is a balance to be found.

Hallow’s Eve has strong links back to Samhain, or “summer’s end” Which is part of the Celtic calendar. It is one of the most important days of the year, representing a mid point in the year. Occurring opposite the great Spring Festival of May Day, or Beltain, this day represented the turning point of the year, the eve of the new year which begins with the onset of the dark phase of the year.

True it is suppose to be a night when the veil that separates the link to the spirit world is at its thinnest; when we may ‘see’ the other side of life. But personally I do think that is strictly true, it is just that our intention is stronger on that given night, as so many people remember those past, so the natural link is stronger. But they will not just pop up around you, only those whom wish to see the signs will do so.

So on the evening of 31st October, yes of course, dress up, play the games, go trick or treating, have some fun…. but also  rejoice at the pleasure of loving someone whom has past, celebrating the love you have for them. This can be done simple by thought or a ritual – flowers in the house, light a candle, listen to a song, or write a note.

One ritual I love is message on a pebble – you simple find a pebble write your message of love and either place in bowl of water or throw into the sea – this is an old ritual which is so nice to do. I would love to think that on this up and coming trick or treat holiday that you all spend a little time smiling at the memories of those past and then go out and eat as much candy as you can.

An early reference to wearing costumes at Halloween comes from Scotland in 1585, but they may pre-date this. There are many references to the custom during the 18th and 19th centuries in the Celtic countries of Scotland and Ireland where it is suggested that the custom comes from the Celtic festivals of Samhain and Calan Gaeaf, or from the practice of “souling” (see soul cake below) at Hallowtide.  So from at least the 16th century, the festival included mumming and guising, which involved people going house-to-house in costume (or in disguise), usually reciting verses or songs in exchange for food.

In 19th century Scotland, youths went house-to-house with masked, painted or blackened faces, often threatening to do mischief if they were not welcomed.  In parts of Wales, men went about dressed as fearsome beings called gwrachod.

In parts of southern Ireland, a man dressed as a Láir Bhán (white mare) led youths house-to-house reciting verses in exchange for food. Elsewhere in Europe, mumming and costumes were part of other yearly festivals. However, in the Celtic-speaking regions they were  “particularly appropriate to a night upon which supernatural beings were said to be abroad and could be imitated or warded off by human wanderers”.

It is suggested that the costumes were a means of imitating, or disguising oneself from, the Aos Sí. F. Marian McNeill suggests that the ancient pagan festival included people wearing masks or costumes to represent spirits, and that faces were marked with ashes taken from the sacred bonfire.

It has also been suggested that the wearing of Halloween costumes developed from Christian customs created in Western Europe around the 15th century. “Soaling”, the custom of baking and sharing soul cakes for all christened souls,has been suggested as the origin of trick-or-treating, and “used to consist of parties of children, dressed up in fantastic costume, who went round to the farm houses and cottages, signing a song, and begging for cakes (spoken of as “Soal-cakes”), apples, money, or anything that the goodwives would give them; the practice was mentioned by Shakespeare his play The Two Gentlemen of Verona(1593).The custom of wearing costumes has been explicated by Prince Sorie Conteh, who wrote: “It was traditionally believed that the souls of the departed wandered the earth until All Saints’ Day, and All Hallows’ Eve provided one last chance for the dead to gain vengeance on their enemies before moving to the next world. In order to avoid being recognised by any soul that might be seeking such vengeance, people would don masks or costumes to disguise their identities”.
Halloween costumes are traditionally based on frightening supernatural or folkloric beings. In the 1840’s the famous potato famine’ struck Ireland. Many Irish fled Ireland in search of refuge and ended up in America as immigrants. Although the practice of dressing up on Halloween was already a practice in Europe, this is when the ceremony was brought to America. However, by the 1930s costumes based on characters in mass media such as film, literature, and radio were popular. Halloween costumes have tended to be worn mainly by young people, but since the mid-20th century they have been increasingly worn by adults also.

Soul Cake  – the start of trick or treating

Souling was a Christian practice carried out in many English towns on Halloween and Christmas.

A soul cake is a small round cake which is traditionally made for All Hallows’ Eve to commemorate the dead in the Christian tradition. The cakes, often simply referred to as souls, are given out to soulers (mainly consisting of children and the poor) who go from door to door during the days of Allhallowtide singing and saying prayers for the dead. The practice of giving and eating soul cakes continues in some countries today, such as Portugal (where it is known as Pão-por-Deus), and in other countries, it is seen as the origin of the practice of trick-or-treating. In Lancashire and in the North-east of England they were also known as Harcakes.

The tradition of giving soul cakes was celebrated in Britain or Ireland during the Middle Ages,although similar practices for the souls of the dead were found as far south as Italy.

The cakes were usually filled with allspice, nutmeg, cinnamon, ginger or other sweet spices, raisins or currants, and before baking were topped with the mark of a cross to signify that these were alms. They were traditionally set out with glasses of wine on All Hallows’ Eve as an offering for the dead and on All Saints’ Day and All Souls’ Day children would go “souling”, or ritually begging for cakes door to door. In 1891, Rev. M. P. Holme of Tattenhall, Cheshire, collected the song traditionally sung during souling, from a little girl at the local school. Two years later, the text and tune were published by folklorist Lucy Broadwood, who commented that souling was still practised at that time in Cheshire and Shropshire. Further recordings of the traditional soul-cake song were collected in various parts of England until the 1950s. Versions collected later may have been influenced by folk revival recordings of the song by such groups as The Watersons.

The 1891 song contains a chorus and three verses:
[Chorus]
A soul! a soul! a soul-cake!
Please good Missis, a soul-cake!
An apple, a pear, a plum, or a cherry,
Any good thing to make us all merry.
One for Peter, two for Paul
Three for Him who made us all.

[Verse 1]
God bless the master of this house,
The misteress also,
And all the little children
That round your table grow.
Likewise young men and maidens,
Your cattle and your store ;
And all that dwells within your gates,
We wish you ten times more.

In 1963, the American folk group Peter, Paul and Mary recorded this as “A’ Soalin”, including all the verses as well as parts of “Hey, Ho, Nobody Home” and “God Rest You Merry, Gentlemen” (which are traditionally associated with Christmas). The musical arrangement (including the accompaniment, chords, and interpolations from the other traditional songs) is quite different from the published 1893 version.

Out of this ancient tradition comes one of our most famous icons of the holiday: the Jack-o-lantern. Originating from Irish folkfore, the Jack-o-lantern was used as a light for the lost soul of Jack, a notorious trickster, stuck between worlds. Jack is said to have tricked the devil into a truck of a tree and by carving an image of a cross in the tree’s trunk, he trapped the devil there. His pranks denied him access to Heaven, and having angered the devil also to Hell, so Jack was a lost soul, trapped between worlds. As a consolation, the devil gave him a sole ember to light his way through the darkness between worlds.
Originally in Ireland turnips were carved out and candles placed inside as lanterns lit to help guide Jack’s lost spirit back home. Hence the term: Jack-o-lanterns. Later, when immigrants came to the new world, pumpkins were more readily available, and so the carved pumpkins carrying a lit candle served the same function.
Tweet

. #‎FaithinHumanity‬ ‪#‎EnergyFlows‬ Do not build your faith in all of humanity around the actions of a few, who have lost their […]

Intuition literally means learning from within…. When we encounter any new experience as a child we look towards our elders and our […]