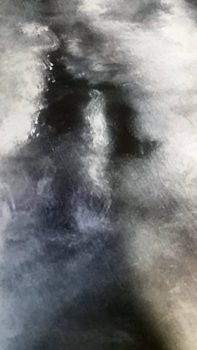 I had been trying to meditate for ages. I actually began to realize I was actively doing it at night while I was falling asleep. I was using deep breathing and relaxation techniques without even realizing it.

For weeks I had been asking to meet my guides. One evening as I was doing this I began to see the color red. I began to concentrate with everything I had. I saw this young indian man. He was muscular and had the most gorgeous black hair I had ever seen. I asked who he was, I received no answer, or at least not the answer I was seeking. He showed me battles, loss of life, there was blood and sadness. Sadness from him. He was devastated by the horrors he has partaken in.
I posted that evening wondering if this was a past life or a guide meeting. Many warned that past lives should never be explored alone, it was dangerous and could lead to feeling disconnected in a soul sense. Which I understood but had experienced the soul separation in waking moments and interactions with people, personally I wasn’t worried. I knew there was no worry. I personally didn’t feel any danger. I’m sure many people in the circle have experienced frustration in their working with me. I gather what others say and if it rings true fine, if not… I carry on. Lol.
As my mediation continued I was told this Indian was my guide, my protector and part of the reason many have said I have always been safe and secure. Why was he my guide? I was to help him to remember the good he did before the pain he felt he caused. To remember the bad is shed as good is done. I was to help his soul recover from the pain he carried.
In the name! I asked every time. Finally we settled on Jo. In a later visit his name would be revealed as Anteanajo. I’m sure this has meaning but have been unable to find it.
He is no longer young. I began to see him as an older chief and healer as my energy healing began. At my reiki 11 attunement my teacher wasn’t sure he was going to allow her in. She confirmed for me then he was acting as protector and he was a father figure, we had shared many lives together and at my reiki 1 he had appeared with an Indian woman close to his age. She was referred to as the wise woman of the tribe.

Jo has since channeled several messages to be when I am seeking answers. I hear him on my sides and behind me. His voice is soft, wise and knowing. He alerts be to be aware when I feel his blanket of protection around my shoulders. I don’t see him much anymore but when I ask, he is there. ♡

Throughout my time in my spiritual circles and here at energy flows healing has always been the mystery to me. How are [...]

Why do we need energy protection? In the real world there are people or energies that choose to take and intimidate  others […]

Why is it that anxiety is cloaked in mediumship. Often it seems that instantaneous bouts of anxiety surface with the possibility of […]